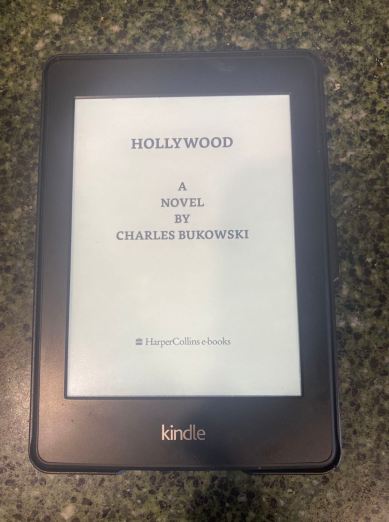 I unashamedly love the works of Charles Bukowski, despite the poor critical reception that his works have drawn and continue to receive. As a semi-autobiographical account of Bukowski’s involvement in the making of the film Barfly, Hollywood is different from his earlier novels that I have read (Post Office and Factotum) in the sense that Bukowski’s alter ego in the novel, Henry Chinaski, is not depicted as an impoverished drunk, but as an older, semi-famous writer. His womanizing days are also over, as he is in a functioning relationship with a woman named Sarah, a fictional pseudonym for Bukowski’s partner in his later years, Linda Lee Bukowski. While the book contains plenty of heavy drinking and Bukowski’s usual tone of dark, lovable fatalism, throughout the novel there are moments when Chinaski looks back on his days of being wild with nostalgic longing. While on set, and watching the filming of a bar fight scene, Chinaski laments the passing of his more boisterous youth:

“I watched and I have to tell you that I grew weak watching that old dream. I wanted to be one of them, going at it again. Stupid or not, I felt like punching the alley wall. Born to die.” (187)

Out of all of the reminiscing, the most poignant moment for me was when during filming, Chinaski recollects the memory of Jane, his late partner who he bases Francine Bowers’ (Faye Dunaway) character on, and he muses about how movies and actors cannot fully evoke the feelings and emotions that screenplays are inspired by:

“I remembered Jane going up that same hill while I was carrying the large sack of bottles. Only when she had screamed “I want some corn!” it had been as if she wanted the whole world back, the world that she had somehow missed out on or the world that had somehow passed her by. The corn was to be her victory, her reward, her revenge, her song” (171).

There are only a few observations at this level of depth to be found, and though the novel is light and comical it is never boring. As Bukowski’s fifth published novel, we see the work of an author still interested in the improvement of their craft. For anyone who loves the pop culture of the eighties, the novel is a delight as it depicts and celebrates a number of film stars and celebrities of that era. Robert Ebert, Francis Ford Coppola, David Lynch, Faye Dunaway, Mickey Rourke, Sean Penn, Dennis Hopper among others all make appearances in the novel. It would be interesting to question some of these figures that are still alive about whether or not these interactions took place in the way that Bukowski remembers them, if they even took place at all. This novel also provides substantial commentary on the role of authorship, authorial intention, metafiction, the creative process, and the bureaucracy that was and still is Hollywood. I highly enjoyed this book and recommend it, preferably accompanied with some beer and a shot of whiskey.