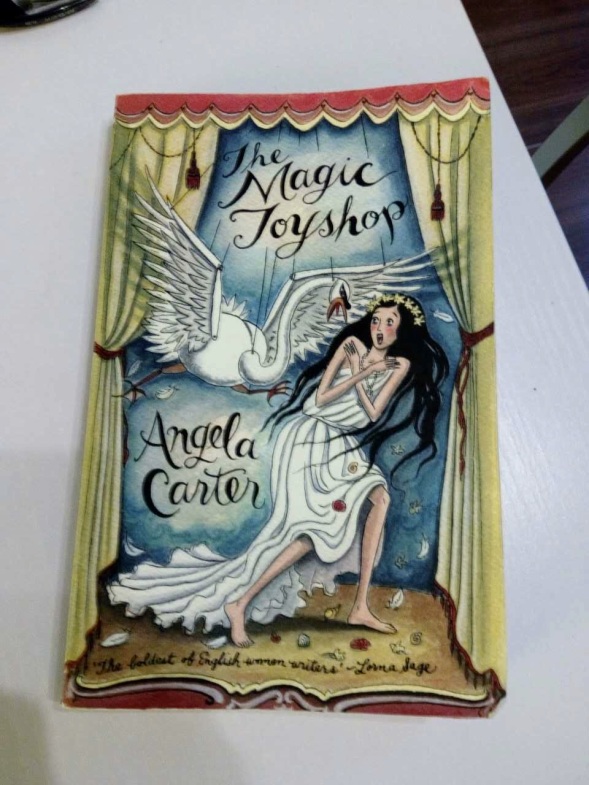 I have been a fan of Angela Carter since 2011, when a college professor assigned her short story “The Erl-King” for a critical theory class, and since then I have gone on to read a few other stories from Carter’s famous collection, The Bloody Chamber. The way Carter is able to write about the erotic, instinctual side of human nature is something that I hold in great admiration. I also find that she had a great ear for language, as her sentences flow with a folky, feminine rhythm, a quality that is reminiscent to me of Virginia Woolf, and her own rich, elegant, ornamented prose.

This novel tells the coming of age story of fourteen-year-old Melanie, whose childhood comes to an end after her parents die in a fatal accident. She is sent to London with her younger siblings, Jonathan and Victoria, to live with Uncle Philip, a controlling, tyrannic toyshop proprietor who puts on strange puppet shows for the family. The other occupants of the house include Philip’s wife Margaret, who is friendly but mute, and her younger brothers, the dirty Finn and cordial Francie. Carter’s characterizations excel, as Philip’s totalitarianism depresses the other characters to an observable effect. Jonathan engrosses himself in building model ships, and Victoria, only a baby, is spoiled by Margaret, and thus unaware of the growing tension in the house. Finn is full of life, hopelessly filthy, and shown to be interested in Melanie romantically. Melanie is suspicious of Finn’s intentions, and her loneliness is worthy of note, as we see that her inability to trust the other people of the house distorts the reader’s perception of who is “moral,” or “likable,” and at times this is jarring for one’s summation of the circumstances presented. At the end of the novel, Philip one day steps unexpectedly out of the house, and Melanie and company indulge in a carefree, defiant, Saturnalia-like afternoon. Francie and Margaret are revealed to be incestuous, and Finn unexpectedly washes himself.

The only word I have for this book is “weird,”and despite the seemingly juvenile front cover, it is very much an adult book, and also a challenging read. There is certainly a method in Carter’s madness, as she acknowledges a side of humanity that most people would not like to think about, so much that I think the book could possibly qualify as horror. Sex also bleeds throughout the narrative. I did think however that Philip was written to be somewhat of straw man: though I understand that Carter was a feminist, I would have liked to see a more balanced take on his character. This is just personal preference however, and not a technical flaw. I absolutely enjoyed this book.